My friend Bruce Wilkinson suggests in his book You Were Born for This that we should daily ask God to arrange circumstances to open opportunities to serve Him. As an example, he tells the story of an encounter he had while driving late at night.

Bruce came upon an older-model van off the side of the road with a man wearing a turban, waving for help. As is his tendency, Bruce stopped to help the person he perceived to be in trouble.

The man indicated that his van had broken down, and he was without cash—a requirement for a tow truck. He had been there for hours, dripping with perspiration and worry.

After inviting him into his car and giving him a bottle of cool water, Bruce learned he not only had spent hours in the heat, but he had been verbally abused with profanity by several people who drove by. He was worried that his wife and kids were no doubt panicking over his long overdue arrival at home.

At that point, Bruce believed this was God’s answer to his earlier prayers for opportunities to serve. He apologized for all the inconsiderate people who passed, like the Pharisees in the Good Samaritan story (Luke 10:29-37). Bruce asked the man to forgive the thoughtlessness of those people, and then gave him more than enough money to pay for the tow truck.

When the man assured Bruce he would pay him back, Bruce refused and said he had money “set aside” to give whenever God indicated to give it.

The man was flabbergasted and did not know what to say. Then it dawned on him that Bruce might be an angel. While Bruce assured him this was not the case, the man realized that Bruce was indeed sent by God.

How will you represent God to those around you today? Are you ready to participate in a modern-day miracle? 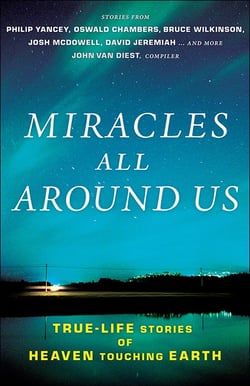 Be inspired by true-life stories of heaven touching earth in Miracles All Around Us.